You are in a modal window. Press the escape key to exit.

In celebration of Amerasia week, please join us for the upcoming event with our esteemed keynote speaker, Dr. Patrick Hayashi on Wednesday, March 4 from 12:00-1:00PM in the Alice Peters Auditorium (PB 191).
All are invited (including non members and non-AFSA affiliates). You do not need to RSVP. We hope to see you there! 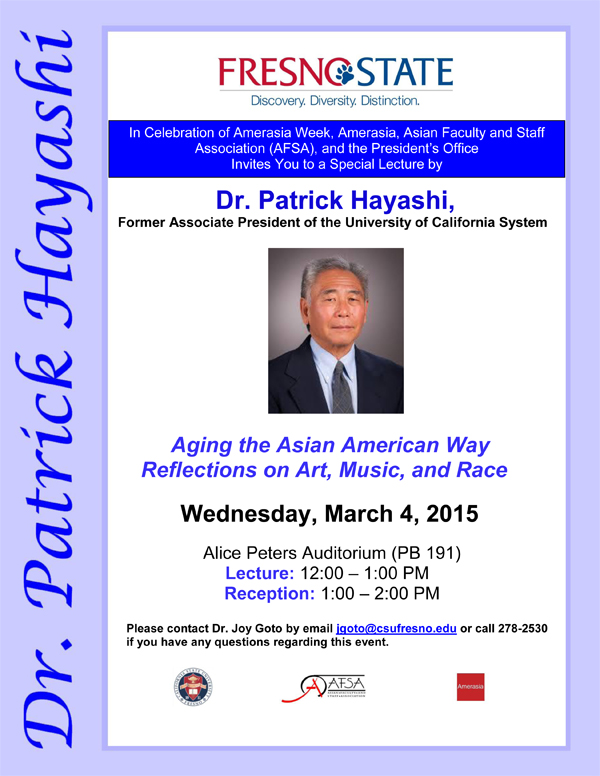 
Co-sponsored by: Amerasia, Asian Faculty and Staff Association (AFSA), and the President’s Office

Pat began his career at UC Berkeley in 1966 as a campus mail carrier.   He later worked in budget, accounting, contracts and grants and personnel.   In 1969 he began teaching freshman writing in the new Asian American Studies program.   He served as head of the program from 1971-73 and appointed Ron Takaki as the program’s first tenured professor. In 1988, in the midst of a bitter controversy over Asian American admissions, Chancellor Heyman appointed him associate vice chancellor for admissions and enrollment.  With that appointment, he became the highest ranking API administrator in the UC system.  While overseeing admissions, he initiated Berkeley’s move to adopt holistic review procedures and to view applicants as more than the sum of their grades and test scores. In 1999, Pat joined UC’s Office of the President where he served as associate president under President Richard Atkinson.   He was chief architect of Atkinson’s challenge to the SAT.   During that time, he also served as a trustee of the College Board, which administers the SAT program, and tried to convince the Board to sever its ties with the National Merit Scholarship Program on the grounds that it advanced a fraudulent, indefensible concept of merit that unfairly discriminated against students of color and disadvantaged students.  After failing to persuade the College Board, he initiated a campaign at UC that, in 2005, led all UC campuses to drop out of the program.  He remains a staunch critic of standardized college admissions tests.

After retiring from UC in 2004, Pat has taken up art.   At the invitation of the US State Department, in October 2013, he travelled to Kyrgyzstan where he gave lectures on the Japanese American concentration camps and master classes at art colleges on how to paint with smoke and fire, a medium he discovered by accident while nearly setting his kitchen ablaze.   He has also started voice lessons and goes to CrossFit three times a week (theoretically).